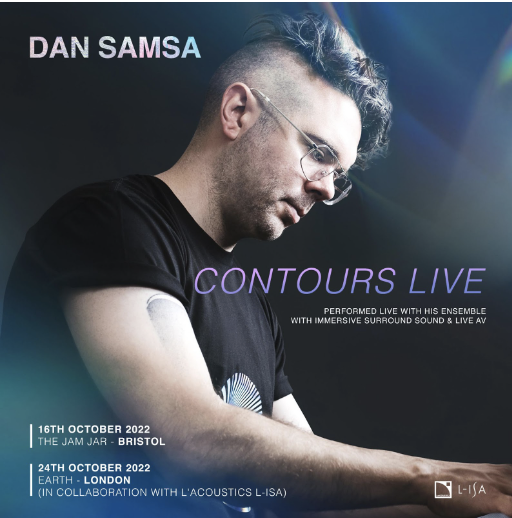 Emerging from the cultural melting pot of South London, Dan Samsa has spent his career at the intersections of genres and mediums and is fast becoming known for his pioneering use of immersive technologies and unique spatial sound experiences. Two of his recent projects reflect this recognition: a commission by Philip Glass reimagining a selection of the composer’s works for his 85th birthday; and a series of boundary-breaking immersive sound events in collaboration with industry-leading studio speaker brand Genelec.

This is how Dan intended his innovative debut album to be experienced, as he blends classical, techno, jungle and jazz and his groundbreaking 360° sound textures into a powerful, genre-defying exploration. Excitement has already been building, with Contours receiving radio support from Gilles Peterson on BBC Radio 6 and Jay Phelps on Jazz FM.

Both live shows will feature technology designed by L-Acoustics. Dan’s recording techniques make for a world first where we'll experience his tapestry of 360° microphone textures and live orchestrated 12-part experimental jazz material, specifically composed for spatial audio and presented in L-Acoustics L-ISA technology, permanently installed at EartH. L-ISA immersive offers artists the ability to share their creations dynamically in an ultra-high resolution soundscape which invites the audience to connect more deeply with the music. The L-ISA spatial audio technology at EartH will be specially replicated for the JamJar show in Bristol.

This hybrid performance is designed to push technology, live performance & modern music into completely new spheres.  The first show at The Jam Jar Bristol, will also be an all dayer, with support from young forward thinking Bristol based electronic music label and arts collective Intrinzic Music.

This will be a very special one off, not-to-be-missed experience where Dan Samsa will showcase his recent groundbreaking work in immersive sound and showcasing some of the UK’s finest Jazz and electronic music artists.