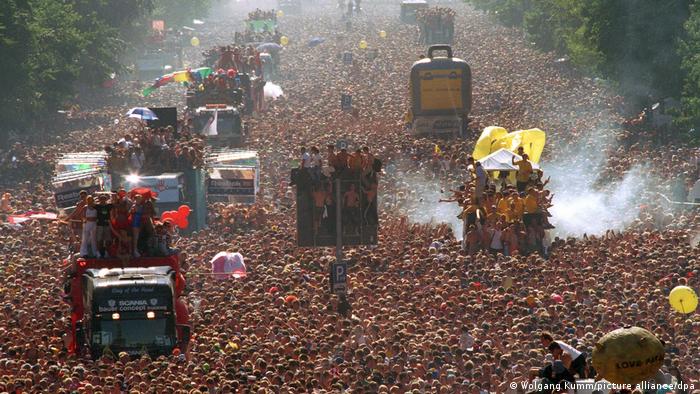 Featuring 150 DJs and over 200,000 fans, Rave The Planet Parade was one of a kind, reviving the Love Parade in a completely new form. Berlin came up with the revamped idea to launch such a march after a long 15 year- drought for similar events. The seven kilometers long parade was held across the German capital, from Kurfürstendamm to Großer Stern, where the final rally took place on July 9th and 10th.

Dr. Motte also said that the event will be a "political demonstration" for the preservation of electronic dance music culture.

The parade was an overwhelming success, thanks to the massive response and support it got from a tsunami of 200,000 fans. The organizers estimated to report a 300,000 count, however Der Tagesspiegel and the police have scaled the parade to actually have 200,000 attendants. 18 floats rolled towards Großer Stern, with over 150 DJs performing various electronic music themes in the event.

Hazem El-Dabaa and DJ HAYEK, the Egyptian founders of Free People Collective crew, performed at a float, playing gabber and industrial techno. They were really emotional and expressed their happiness and motivation behind their participation:

“It was important to represent the young and upcoming hardcore scene and to be the first Egyptians to take part."

On Saturday night, the rave had to be called off 40 minutes early due to security concerns from the police as "there were too many people"- Ellen Dosch-Roeingh.

Also, Dr Motte, the mentor of the event, has been criticized for publicly displaying the symbol of the Querdenken movement during the parade.

The movement "encompasses far-right extremists but also anti-vaxxers who historically have aligned with the left" - Deutsches Haus at NYU.

The Love Parade events stopped worldwide in 2010, after 21 people died in a crush at the Duisburg edition.